The term “mandala” comes from the ancient Indian language called Sanskrit and means circle, circular, round. The symbol of a circle symbolizes perfection, wholeness, oneness. A circle is a sign of the absolute, concentrated in itself with no beginning and no end.

The circle is found everywhere in nature. It is present in the world of each individual as well as throughout the entire universe. Because of the constant motion of both, the universe and all beings on this planet also move continuously.

The substance of the universe is consciousness. Everything that exists, be it minerals, plants, animals or humans with their thoughts, words and actions, everything emits energy into the universe. Movement is caused by this emission of energy. Where there is movement, there is also sound, which is part of a melody. The origin of every frequency, movement, sound or melody is in the Source and also returns to It.

The circle expands and evolves from its centre. All points on the circular line meet in the centre of the circle which is thus their beginning and their end.

The circle also represents time. Time is seen in three ways: First, there is the past, yesterday, something that already happened and accompanies us in the present. Our past exists in the present, in this very moment. The future is uncertain, and it reflects our present.

The circle represents sowing and reaping; we move in circles until we reach spiritual maturity.
There is a circle of time. We come from eternity, and we return to it. This is clearly illustrated by the birth-and-death process.

The circle is also the symbol of protection. It is the shape which continues around its edge to protect the inside; hence the use of defensive walls around towns, churches and temples.
A mandala is also formed when people gather around a fireplace.

The Earth and other planets are spherical when observed from space. Together, they are part of a larger whole that extends to infinity in a spherical shape.

Our life is also a kind of mandala made of words, thoughts, actions and their outcomes. The saying “what goes around comes around” finds proper place here. A lifetime is made up of cycles of seven years that re-occur after a fixed period of time in a sequence. Unresolved issues re-appear in our lives when this cycle repeats itself.

After the rain, the sun comes; after the sun, the rain comes; after the night, the day comes; after the day, the night comes, and the circle closes. Life is movement that goes in a circle.
From the insemination of the female’s egg, which is round, the body is formed. Our physical body is surrounded by subtle energy bodies, and we have seven energy centres. Each centre has its own frequency, colour, symbol and is our link between the visible physical and the invisible – that which is seen by our spiritual eye. A human being is a mirror of creation, something that receives and, to some extent, reflects.

Golden mug MANDALA - A MUG THAT WILL MAKE YOUR DAY!

We created an exceptional mandala mug in gold colour.

You can choose between two different mandala – inspired mugs, one with the “Star of Love” mandala and one with the ” Abundance” mandala. 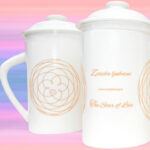