THE SECRET OF LIFE

The secret of life is to act from the heart.
Tests are on the path,
But as I am in the heart,
These are challenges that can be surmounted.

I WAIT FOR YOU IN THE HEART

Life teaches.
Inspired, it composes a book.
I read in it of Love,
Of the right one, full of Light.
I look out for her, watching the world,
Hoping to catch a sight of her.
We long for each other.
Once more, I look into the book of life,
And, miraculously, I see a note in it:
“I am Love, and I wait for you in the heart.”

There was everything – sunny days and dark nights.
A sunny day is Love,
Dark nights are unfulfilled desires.
If only I did not have so many desires,
The dark nights would also become
Full of Love and Light.

HEART IS THE GUIDE

The foundations of the past
evolve into the present
And grow into future.
The roots are the source of
knowledge and the basis of differentiation.
The heart is the guide, the minded the judge.
The first thought is the thought of Light,
The second one is doubt.
I follow the first, therefore I do not miss.
Perfection, joy, peace
And all the riches are already mine,
So I share and spread them.

The source is everything.
Everything moves around it and towards it.
It is the creator, the sustainer
And the harmony of wholeness.
Looking at it is my joy.
The goal is to return home into the Source.

Life is variegated and interesting.
All is permitted to me,
But not everything is good.
The decision is mine.
Through time, I realize
That payment comes to its turn.
According to my decision,
I get appropriate payment!

FREE AS A BIRD

“Whoever will skim through this book will soon discover why it follows “magical paths”. Our mandalas are created to invoke a feeling as if we are staring at countless water drops of the rainbow glowing the sun. And rainbow has always held a deep symbolic meaning. It connects the sky with the earth and represents the qualities of the divine and the ideal. According to the Slovenian folk belief, the colourful rainbow arch has the God’s throne on top of it. To the Hebrews, it represented a blessing, a revival, reunion and serenity, whereas the Chinese see it as a harmonious combination of the fundamental principles of yin and yang. Some of these characteristics will surely be recognised by anyone who has ever dived a bit deeper into its shining light.”

MANDALA is a sacred place, often of circular shape, which reveals the inner truth about us and the world in which we exist. Mandalas can thus show the external reality which we see as well as the invisible inwardness of our mind and body. If we follow the path that guides us through the mandala, we can experience the wholeness and unity with everything that is in our real human nature. It also enables us to restore our inner peace and harmony regardless of the disturbing effects coming from the external environment.
And this is the story told by our mandala exhibition that was prepared by Gabrijela Železnik and Vanda Omejc and is the seventh annual mandala exhibition taking place in Plečnik’s ambient of the National and University Library, which is a sort of a mandala in itself. The artistic creations of both artists intertwine with a deep poetic experience offered by the numerous verses, such as:

In silence I hear a voice.
The voice of Creation.
I listen to it.
Step by step
I follow it.

Such meditative atmosphere is perfect for creating new mandalas. Designing and painting them – or just merely watching them – increases our ability to experience the rough physical surroundings differently, in a more holy, spiritual and symbolic way.
It is quite spectacular how important this ability to “imagine visually” was and still is in India and Tibet. Masters of meditation are renowned for their ability to see a number of different mandalas when meditating; they appear in front of their eyes in all kinds of shapes and colours. The thousands-year-old Tibetan Buddhist tradition has certain rules conditioning mandala design based on religious, mathematical, astrological and other criteria. Our mandalas that we see here were created more or less spontaneously, without limiting the authors. However, these mandalas are in their essence still what they should be: spiritual circles of knowledge, harmony and happiness.

Or as the Buddhists like to say: “Regard all beings as Buddhas, hear all voices as mantras, see all reality as a mandala". If this aim is achieved, mandalas will also have healing properties. Just being in our presence (e.g. in a form of a picture, an amulet etc.) is enough for the mandala to exert this power, and it affects us whether we are aware of it or not. We can further increase mandala’s therapeutic effects by meditating on it or in its presence, on its forms, symbols, colours, numbers, or deities. By doing so, we also get more in touch with our own essence. Since every person is a unique being – in terms of our own personalities – each one of us has our own mandala which is closest to us and affects us most, even though some mandalas may look very alike. And when a specific mandala brings us to a certain point on our path, we can replace it and choose a different one. The Tibetans do this at the end of a special religious ceremony by hand-sweeping the colourful mandala off the table after days and weeks of creating it. After destroying the mandala, they throw its dust into a brook or a river. By doing so, they wish to communicate a message that mandala is merely a tool and not something a person should get attached to. In other words, mandala is only a finger pointing towards the Moon and not the Moon itself. This can be clearly seen also when the previously colourful Tibetan mandala becomes deathly grey. If we only marvel at mandalas without creating any in our inner selves, it is only a beautiful illusion; there is a saying that thousand temples are of little use if we do not have a temple also in our hearts.

Mandalas are closely connected with the circular symbols of creation, which are known in nearly every culture. In the Christian West, mandala is referred to as a “mandorla” (almond) or a “golden egg” and “golden apple” (such as in our fairy tales), and it also represents the circular and elliptical path of the universe, the zodiac, the original forces that created the world, a renewable life etc. But there are not many among us who could deny seeing something in a mandala of this or other kind, at least some sort of a flower. In his movie Seven Samurai (1954), the Japanese director Akira Kurosava included a scene with a samurai sitting under a blossoming cherry tree before the final battle with the enemy when life is at stake, smiling at the blossom he holds in his hand. This scene is reminiscent of the Buddha’s sermon during which the master did not say a word but only showed a flower to his students, holding it in his hands. This message was supposed to be interpreted correctly only by Kaśyapa, who explained it by saying that some truths cannot be articulated in words. The fact that this is not only a legend but a creative mental concept is demonstrated by the Indian Buddhist cosmology which envisions our world as a lotus flower with numerous leaves lying in the middle of the sea and being symmetrically arranged around the central mountain of Meru. In Europe, this flower became the royal red rose and the rustic white daisy or the yellow St. John’s wort, but in Japan, this has always been the cherry blossom.
In Slovenia, the magic of this “cherry blossom” was not experienced by many but was heartily felt by our great poet Kajuh, which further proves the fact that this symbolism is still very much alive to this day, especially in moments of existential crisis and distress.

As we briefly explained, we can find mandalas all around us but only if we want to: they are present in a form of a spider web or the coiled snail’s shell, they can be observed in the galaxies on our starry sky, in the structure of the atom, in the rings of a tree trunk. Our solar system is in itself a sort of a mandala (looking at it from the circular and heliocentric perspective), thus it makes perfect sense that our perception of time and space is so deeply associated with all of the cosmic symbols. And this is the very essence of the wisdom conveyed by the ancient Indian poetry and the great French mathematician Bernoulli: how one can see a reflection of our vast world in the tiniest drop of morning dew. The path of the mandala is thus a way of understanding and rediscovering one’s own true self.
Dr. Zmago Šmitek, PhD in Ethnology

With the year coming to an end, we decided to adorn two more useful products with our mandalas. We are very proud to present Mandala blankets and Mandala multipurpose bandanas. Both items come in three carefully selected mandalas. 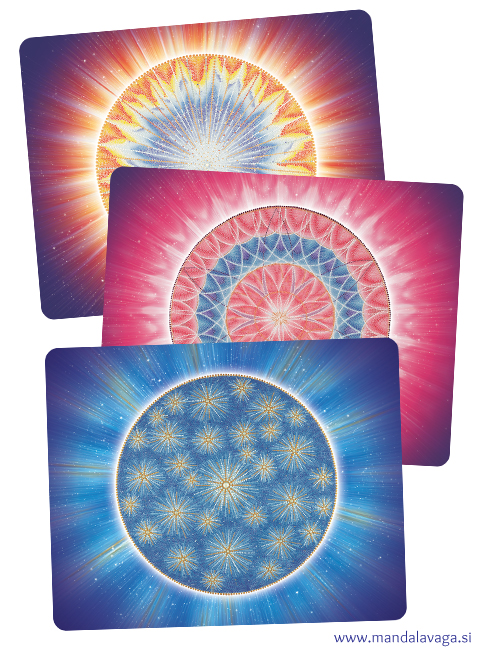 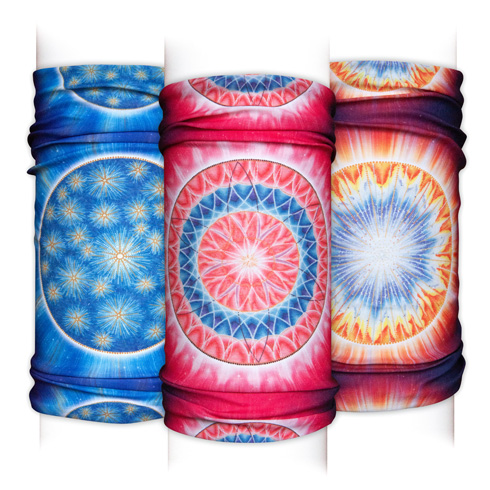 A set of MANDALA cups that offer more

A unique 350 ml ceramic cup with a mandala is a great choice for serving and enjoying a variety of hot and cold beverages. Dishwasher safe.

MANDALA CUPS – enjoy an even sweeter taste of your favourite drink.
Daily use of cups with mandalas improves well-being.
The mandala energizes the drink with the energy of love and harmony.
Wait about three minutes to “inform” the drink.
A wonderful and unique gift!